With Suzanne and the kids away for a week, I’ve been holding up my end of the bargain and working to make some significant progress with GeoGlue. After getting hung up quite a while on the nuances of Google and Yahoo maps – not to mention Flash encoding – I chose to take a more lightweight approach to getting a first-cut working product out to production. I’ve revamped the user interface pretty significantly but still many of the tried and true styles still manage to show through. 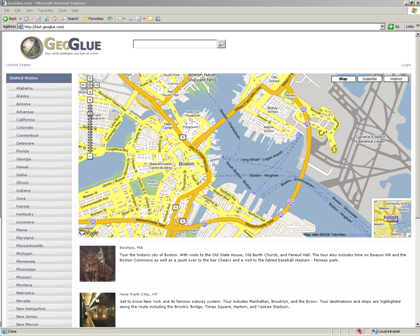 I’m now engaged in getting the site ready for a production push, albeit in a much scaled-back mode, prior to my departure for Detroit on Friday. I’ve included a fuzzy screen shot to give you and idea of what I’m dealing with. As always, if you’re interested in becoming an alpha adopter, drop me a line at alpha@geoglue.com.