I received an email from one of my clients a couple of days back referring to a quote of mine on Cenqua’s website under their Clover.NET product. This brought me back to an article I wrote for Dr.Dobb’s Journal when build tools, unit testing products, and continuous integration were making their way from the Java world over to .NET. I decided to meander over to Dr.Dobb’s site (I still call it a site although a barrage of emails from CMP Media constantly reminds me that it’s a new and improved portal) and see if the article is still available. 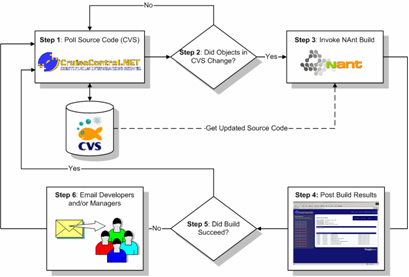 Googling around, I was quickly able to locate the articles, which were published in two parts: Part I and Part II. Reading through the articles, I reflected on how far we’ve come in the .NET community since then. Continuous Integration (CI) and the tools supporting it have been embraced by the community and have found fairly widespread acceptance on commercial and open source products alike. In fact, the pendulum has swung so far in this direction that Microsoft decided that it was time that they undertook the effort to re-create these tools and repackage them within proprietary Microsoft products. The ultimate incarnation of this effort is Team System, which represents Continuous Integration and everything else tangentially related to the software development process rolled into one… and then given a shot of steroids – the proverbial 500 pound gorilla.

If you were thinking that the previous statement was a ramp-up to a bout of low-brow Microsoft bashing, you’d be wrong. Sure, Team System is huge and some of its beta versions were more like pre-Alpha. The last couple of demos I’ve seen, running off of laptops, I’ll add, looked not only fairly stable but pretty darn interesting. Since it was engineered from the ground up as an integrated suite of tools, the integration points appear much more polished than they do with the Rational Enterprise Suite. I can’t speak for how well the product works or for the validity of the third party extension approach. I can, however, attest to hearing quite a bit of interest from clients in the new product. If Microsoft would clearly articulate its strategy for integrating modeling tools with Team System, I would go as far as to say they’d had themselves a single and were picking up speed and heading for second.

If you pull back the covers on Team System, you’ll recognize all of the components that make up your standard Continuous Integration environment; the same ones I wrote about in the article. They’re all there and then some: a build engine, unit testing tool, code coverage reporting, static code analysis, and a completely revamped VSS version control system. This overt infringement on the open source’s domain might rub you the wrong way if you’re a proponent of the open source tools. I still love (and regularly employ or recommend) these tools but I’m open to the way that Microsoft went about making these ideas their own.

Employing James Newkirk, the creator of NUnit, to design the Team System unit testing tool leverages the lessons learned in building and maintaining NUnit and recognizes a valuable member of the open source community for his contributions. The story of a phenomenal documentation tool, NDoc, ends on a less positive note. Whether or not Sandcastle (Micrsoft’s codename for their new documentation tool) would have otherwise spelled the end for NDoc will never be known. The utter lack of financial and maintenance support for NDoc left its creator, Kevin Downs, frustrated enough to relinquish NDoc project ownership. Thankfully, Microsoft has picked up the ball here and I’m sure that once the bugs are worked out, we’ll be able to easily churn out documentation for our .NET 2.0-specific code.

“So where does this leave us?” you might ask. It leaves us with options. Choose to use the open source tools or their Team System counterparts. If you’re feeling particularly lucky, you can write some custom build script tasks and mix and mingle the two. Either way, acceptance of continuous integration will continue to grow in the .NET community. Furthermore, CI will continue to be augmented by tools of ever-increasing sophistication, be it Team System from Microsoft or a Trac or NProject-like variant from the open source community. This is good news for those employing the .NET platform or those considering a move in that direction.

Post Footnotes: In case you’ve been living under a rock for the last 5 years, Fowler’s explanation of continuous integration is considered the seminal work and will get you up to speed quickly. The image above comes from my article and, while not nearly as eloquent or enjoyable as Martin’s explanation; I’ve found it a good and quick way to explain CI to absolute beginners and pointy-haired boss types alike. I’ve included a link to my original code below for the sake of completeness. My apologies in advance since it’s a bit dated.