Just as I was doing a bit of mindmapping of ideas around Internet and societal convergence, my RSS reader buzzed with a new post from Dion Hinchcliffe on Social Computing and Internet Singularity. Dion didn’t go into great details; referring instead to ideas he had articulated in earlier posts. His posting was, however, enough to prompt me to pull together my thoughts, give them a bit more structure and then send them into the great wide world to begin a life of their own.

The idea around Internet singularity, to reuse the quote that Dion referenced from Microsoft’s Dr. Gary Flake is “the idea that a deeper and tighter coupling between the online and offline worlds will accelerate science, business, society, and self-actualization.” “Wow, is Flake talking about true, top-of-the-Maslow pyramid type self actualization” you might ask yourself. I can’t say for sure since self-actualization means different things to different people. To me at least, it appears that the Internet, in its many incarnations, enables the creativity, knowledge, and energy of billions of people to be set free from the shackles of time and space to which they’ve been confined since the beginning of time. This sounds very powerful except that you now have billions of people running in millions of different directions. I postulate that what’s missing in our collective journey to self-actualization is a next generation coordination mechanism. 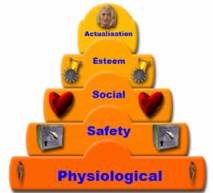 I use the term next generation because coordination mechanisms have been around as long as human societies. Monarchs coordinated the construction of pyramids and cathedrals; governments coordinated the creation of nations and cities; corporations coordinated the design, manufacture, and sale of products. Who will coordinate the creative energies of these billions of people now that they can collaborate across space and time? How will their diverse priorities be aligned? What laws will govern the products produced by citizens of this world’s diverse nations?

I’m not suggesting an Orwellian type mechanism to control the masses. Instead, I’m stating the rather simple fact that few of the things society values today (with the exception of some varieties of arts & letters and products of the remaining lone craftsmen, perhaps) are products of a single individual’s labor. The products we use, the homes we live in, the organizations we work for, and yes, even the children we raise, are all products of teams. Yet, individuals rarely function in teams in the Web 2.0 world. In fact, the Web 2.0 world encourages the free-agent, lone gun, mentality. Creating your own movies, podcasts, publications, and software services are the order of the day. “As long as you expose these things to be ‘mashed up’ or they are collected in a common repository”, goes the common thinking, “we are building communities.”

I submit that when we mash things up, we rarely ever get anything more than mash, mush or some similar m*sh. Coming from a huge fan of Google Maps mashups; I can say that these mashups aren’t getting me any closer to self-actualization. Are the mashups fascinating and fun? Sure. Are they accelerating science, business, society, and self-actualization? Not so much. Acceleration, the type I believe of which Flake speaks, is facilitated by communities of likeminded individuals in pursuit of something greater than the individual. The names in the halls of greatness span the decades: NASA, DARPA, Bell Labs, Xerox PARC, the Manhattan Project. These organizations have achieved the ends which I believe Flake professes. Web 2.0’s Ajax-based maps and digital audio / video are at best standing on the shoulders of giants when compared with such predecessors.

So where does this leave Social Computing and Internet Singularity? Surely there are enough serious challenges that would benefit from a networked team of one billion minds – think global warming and alternative energy, stem cell, DNA, AIDS, and cancer research, space travel and so many more things. With corporations and governments cutting funding for long-term scientific research in favor of short-term profits and political partisanship, respectively, the opportunity is there for someone to fill the shoes of the next generation coordinator.

Can such coordination be done via the Web? How would such projects be funded? How would patents and intellectual property be handled? What aside from money would motivate people to participate in such projects? All these questions and more have yet to be handled in a serious and pragmatic fashion. It’s the answer to these questions and the energy of the visionaries that choose to tackle them, not AJAX and SOA, that will get us all climbing Maslow’s pyramid.