If you haven’t seen the materials yet on the Destiny USA project, it’s worth giving them a look. The official site is a masterpiece of Flash animation and in the Wikipedia entry, as always, you can find all of the details. The goal of the Destiny project is to create a one-of-a-kind eco-tourism complex encompassing shopping, entertainment, dining, and hotel accommodations in Syracuse, New York. The shopping complex would surpass the Mall of America as the country’s largest mall. The “green” touches included everything from a 100% fossil fuel free / sustainable energy operating goal and organically grown food in the restaurants to a glass-enclosed indoor park and 20 acre artificial lake. In addition, there are plans to create a research laboratory near Destiny for research into renewable energy, security, sustainable design, and more. 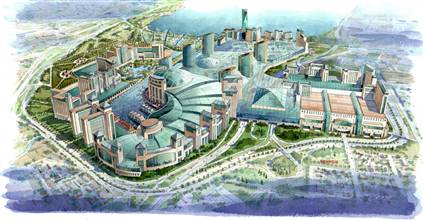 Destiny has received limited press outside of the upstate New York area but it deserves a whole lot more exposure, in my opinion. I found out about the project originally during my interviews with ThoughtWorks, which had been awarded the system integration contract for the Destiny project. Even after I decided not to accept the job offer from TW, I couldn’t get Destiny off of my mind. Now almost two years hence, I still find the time almost every week to see what’s up with Destiny.

Unfortunately, the Destiny project has been mired in red tape and controversy since it was first announced. Over the long term, financing has been the project’s biggest woe. At least one component of the combined Federal “Green Bonds”, state and local tax breaks and creative financing mix seems to be in question at a particular point in time. The biggest challenge that Destiny has faced since I’ve been following the project revolved around their rather unique attempt to buy out, at a fixed rate, the existing businesses that occupied land Destiny was claiming under eminent domain. Lots of fodder for an interesting legal and economic debate that’s done nothing but further impediment any progress.

Destiny’s naysayers play all sorts of angles: the green component of Destiny will never be built; Destiny will turn Syracuse into a cultureless, consumption-driven city like Las Vegas; Robert Congel [the staunch republican who is the money and idea man behind Destiny] is only interested in big oil and will reneg on green commitments, et cetera. The rise in the legalization of gambling / gaming across the U.S. shows that many states, cities, and municipalities would give anything to have a small piece of the Vegas action. With regards to Congel, I tend to think that the man is a saint for having not yet forsaken his native city. The citizens of Syracuse may not recognize an opportunity when they see it but if Robert Congel entertains the idea of taking Destiny to neighboring Pennsylvania, you can sign me up for the welcoming committee.