If you completely missed the milestone, NetBeans version 5.5 was released last week. The IDE contains all of the functionality that’s been around in the beta and pre-release versions for months now, including:

In addition to all of the aforementioned features, which are part of the official 5.5 release, the Visual Web Pack Technology Preview was also released. This long-awaited feature brings to NetBeans a rich JSF-based UI. For those of you that have used Sun’s Studio Creator product, this addition to NetBeans will be both welcome and natural. 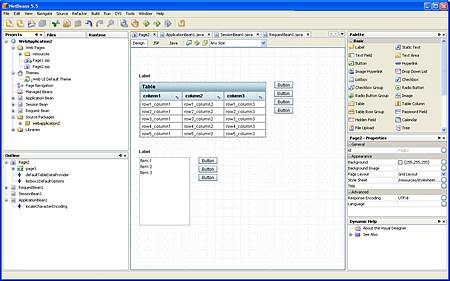 For those of you that have not experienced Studio Creator, the rich UI component IDE will be quite an experience. Standard JSF components are supported as well a number of AJAX-enabled JSF components from Sun’s BluePrint AJAX component modules. The NetBeans team has already created a number of Visual Web Pack specific tutorials. In addition, although I cannot verify it, I am fairly certain that the existing Studio Creator tutorials will work with little or no modification. Finally, if you’ve latched onto Ruby / RoR, check out the CRUD screencast in which NetBeans is used to generate a set of entity beans from a database and then to produce a set of RoR-like scaffolds, all without writing a single line of code.