I’ve added a second state government pattlet to the portfolio. This one is for the case entity. Although a bit more simplistic than our previous pattlet, Case still has some very interesting nuances, such as the use of aspect-oriented techniques to account for associating the writing of case history records with various case-related transactions. 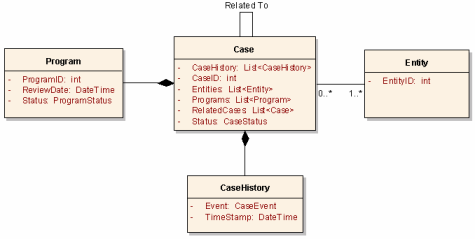 In addition, I have made some minor revisions to the Case Transfer pattlet, upped the version number, and reposted that as well. I’ve also started added these pattlets to two open source pattern repositories.

On PatternShare.org, these two pattlets were the first examples to be added under the business architecture category. I’ve found PatternShare to be very usable and friendly. In essence, it’s a Wiki for patterns. Unfortunately, after the initial loading of the well-known patterns (e.g. GoF, Fowler), there has been little activity in this community, which is a real shame. I was especially disappointed at the non existence of business patterns, since this is an area where I see so much potential.

On et.gov, the process of adding and mapping a pattern was very interesting. You are actually required to submit create and submit an XML mapping describing your asset(s) and then post this XML file out to your site. The XML file I submitted can be [found here](found here). The underlying assets seem to be mapped against the FEA. In many ways, this process is similar to the one I described in my reusable asset post. The only difference is that the discovery mechanism in et.gov is very rudimentary, not near that of some of the commercial tools out there.

As before, the pattlet is licensed under the Creative Commons “Attribution Share-Alike” license. As a next step, I’m looking to move outside of case management for a while and potentially deal with participants. I’m especially interested in working on a Participant Relationship pattlet, since I’ve been having a lot of discussions in that area as of late. I’d also like to fully open source all of this work, including the source code, and post it out to a Subversion repository for people to download. There just don’t seem to be enough hours in the day to get this all done. Any help or assistance would be greatly appreciated.