Sometimes you know that something works a certain way but you haven’t really internalized it, you haven’t grok’ed it, until you experience it firsthand. Such was my knowledge of the interaction between .NET web services and the XML Serializer a couple of weeks ago.

While troubleshooting calls made from a smart client to back-end web services, I was using Process Monitor to see what was going on under the hood. It didn’t dawn on me at first why I was seeing dynamic generation of temporary C# files and compilation of these files using the C# compiler (csc.exe) as shown in the image below. Since the services in question were provided by a legacy mainframe and were necessarily granular and immutable, the client application was generating a lot of new proxies, meaning a lot of wasted time. 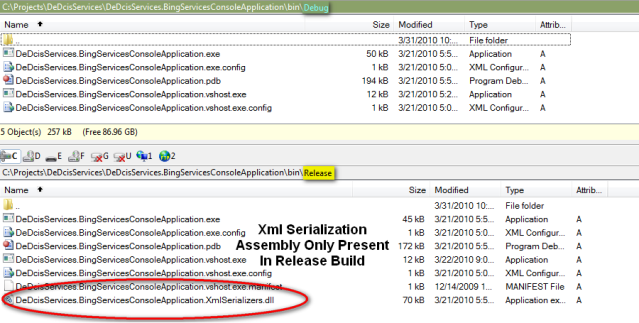 In the final part of this post, I’ll assume that you’re interested in knowing the ways you can get around dynamic XmlSerializer generation and compilation. As you’ve probably derived from the previous section, building a solution with VisualStudio or directly from the underlying MSBuild tool will take care of call the XML Serializer Generator (sgen.exe) for you, as illustrated in the following image.

You can also invoke sgen.exe directly. If you do so, be sure to use the /C flag to pass compiler options. Alternately, if you’re using WCF, you can choose the alternative DataContractSerializer, which has been optimized to avoid the overhead of generating and using the extra assembly and shared only the data contract without sharing the underlying type data.